We’re all alive so that’s a good time to have a get together.  Plus we got the Air Force, planes, helocopters, hospitals and ERs all around us.  We’re safe as we can be at our age right now.

We’re making plans for up coming dinners.  We will do a smoked pork for New Year’s Eve dinner.  Don is cooking a turkey for New Year’s Day dinner.  I think Ed & Sandy are bringing the Depens.  It’s an old person joke…..

It’s hard for me to do a walk around in a RV Park.  I’m looking at other people’s equipment.  Wow, don’t take that out of text!  So now I just walk out of the park and down the road on the sidewalk.  Since we are now back to moving around more I have to get in the habit of carrying my little camera for different “stuff.”

This is a cute little bug.  Good color too…. 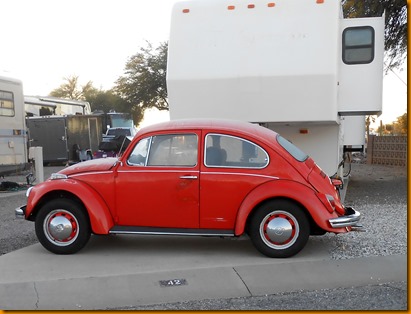 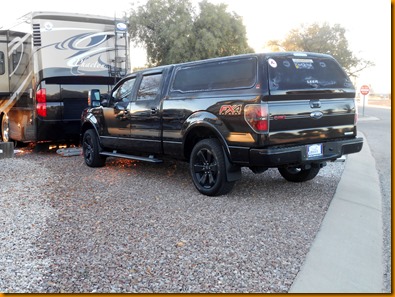 Here’s a picture from Tuesday night.  Sandy was drinking from her sippy bottle.  She seemed to sip on it a lot.  ? 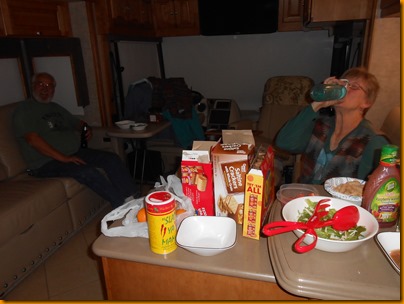 It’s staying pretty cool here in TUCSON like in the low 30’s at night.  I think it’s normal.  During the day you need at least a light coat.

Now Wednesday morning Carol & I went to a $2.99 breakfast out in town.  It was a little resturant and nice looking but nothing real fancy.  Two egss, taters, toast for $2.99 and it wasn’t advertise at the resturant.  No problem.  Come Thursday 5 of us will be eating there.  I guess we were the guiena pigs.

After breakfast we went to Trader’s Joes so Carol coud get her favorite cookies.  Then went back to base and took care of a few things.

For lunch we went back out in town to a Mexican resturant that was advertising $.99 tacos.  I liked them.  Carol said they were too greasy for her.  Oh well…..

Then for dinner we all made something and met at Don & Sharon’s rig.  It was all good.  No pictures.  I get caught up in the momment or it was the 6.9 beer.

All and all it was a nice day with friends.  Any day not in the ER is a nice day for me during the year 2015.