Even though we are and have been living in RV (7 of them) for over 15 years (since June 2000), setting for 3 months just don’t seem normal for us.  It just ain’t the same. We do enjoy being around stationary friends (ex full timers) and even extended RVers but the out and about on the road is our way of life.  It’s a continuing adventure and even an education.

Our Winnebago RV key bob door lock has stopped working AGAIN.  We had it (door wiring) fixed at La Mesa RV (Tucson) earlier this year and had to pay for it.  They accused us saying that someone had jerry riged the wiring and the aftermarket insurance company wouldn’t cover it.  Nobody has worked on it other than Winnebago.  Oh well…. I will get into it in the future and jerry rig it correctily if it don’t fix itself.  Yes, it has….

Carol went and said goodbye to her line dancing friends and her stich & bitch club this morning.

The La Colona gang usually goes on Thursdays for lunch but we went today (Wed) because they are closing down for the rest of the week.  I had my “burnt fries” and charo beans.  They cook the fries extra long so they are really crisp and dark.  They nick named them “burnt fries”.  They are actully getting other customers asking for them.  The owner came over and played some guitar and sang for us.  He’s never done that before.  I guess we are wearing on him. 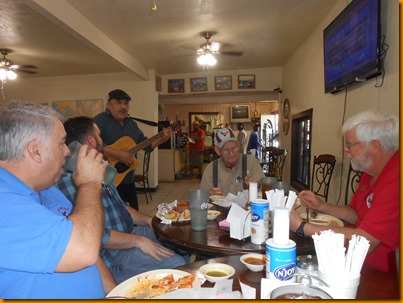 Then it was off to a follow up Dr appoitment for Carol’s foot.  She wanted to make sure her foot is OK before leaving.  It went well and the recovery is on schedule.  Carol has three more weeks of the air cast.  She’s worried about making the Line Dancing Rally in California in March.

Then we stopped at the car port place.  We ordered an 18’ by 41’ and will be 16’ in the center.  They will install it the end of March or the first week in April.  So, we will be back by then of course.

Well, our frig is full and I got beer left over in the mobile frig.  There was only one thing to do,  Call Mark.  I told him I didn’t want to abuse alcohol by putting it in a compartment where it would get warm.  He got off work at 6 PM and came over immediately.  We fixed the problem.

And yes I know I got some mis spellings in yesterdays blog.  No spell check.  I type faster than I think and my proof reading is just about non existant (see).  When I talk I mis spell so now you know it’s really me.

This blog is big… time to go…