Bill Joyce helped me set this up on my new computer via emails.  I don’t know how I can find my old blogs yet.  This Live Writer is a new updated version that I haven’t seen.  I always stuck to the old one without updates.  Oh well, live and learn……..

Got my blood drawn this AM for some special testing.  Hey, it’s red isn’t that enough?  Lucky I got any after the RV dealer tried sucking it all out.  I might have gotten a little of theirs. 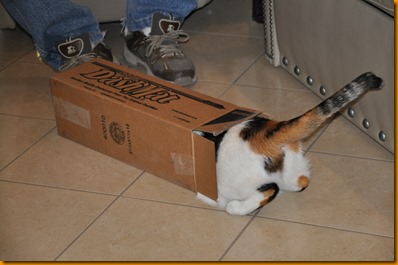 Several reasons why there hasn’t been a blog in the past four weeks.  None of them all that good but interesting.  I will start and try not to bore you to much.

Thursday November 5th.  I had lunch at the La Colina Mexican Restaurant with the guys like most other Thursdays.  I lost at a game and had to eat cow stomach and don’t remember the name of it.  Not real bad but no flavor.  Got back to the rig and called a cement guy.  I wanted a 18’X41’ cement pad constructed in part of our driveway.  No problem for next week since it was raining at the time.

Friday November 6th around midnight.  I was hugging the bathroom toilet.  I thought I had food poisoning from the Subway sub I had for dinner.

Saturday November 7th.  The day was no better than last night.  Carol fell down some steps on the mobile and sprang her foot real good.

Sunday November 8th I was feeling like I hit bottom.  I took Carol to the ER.  They said she sprang her food real good but no broken bones that they could clearly see.  She’s now on crutches and a walker.  In all this Ed & Sandy Kruty arrive.  We couldn’t offer one of our better sites due to the construction.  They did get 30 AMP and water.  Not to bad. 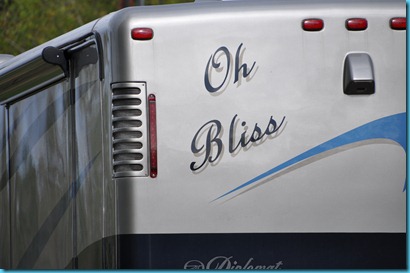 Monday November 9th we all were at a Veteran’s Appreciation Ceremony.  I along with others were going to be presented with quilts as appreciation being Veterans.  Sue Glick made mine.  I wasn’t feeling the greatest but thought I could make it.  Wrong…..  As the ceremony started something hit me square in the middle of my chest full force.  I started to sweat real bad and was in a lot of severe pain.  The Kruty’s drove us all over to the ER/hospital just a half mile away.  I was in tears by the time we arrived.  They rushed me in even without asking my name.  They knew it was serious.  My blood pressure was over 200.  It was like you see on TV in an emergency.  Anyhow, after going thru a lot of tests and on going pain they gave me some shots to finally relieve half the pain.  They diagnosed it as acute pancreatitis.  I got admitted to the hospital where I spent the next 4 nights.  Not the greatest time.  They didn’t feed me till the day of my release.  Not even an IV other than for a lot of Potassium.

The cement pad was constructed with Ed keeping an eye on things while I was being detained and at time felt like a dumb intruder because they wouldn’t tell me very much. 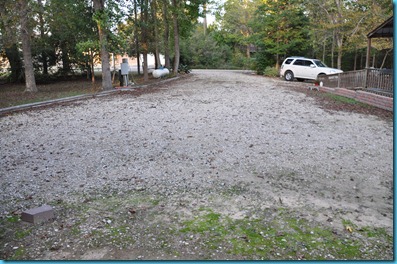 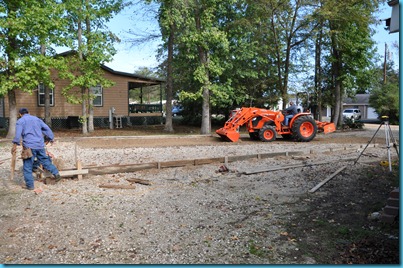 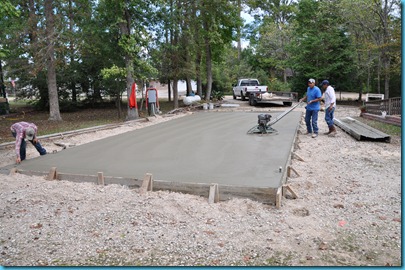 I moved the Class C over by the cement pad after a week or so.  Later on I moved it on the pad. 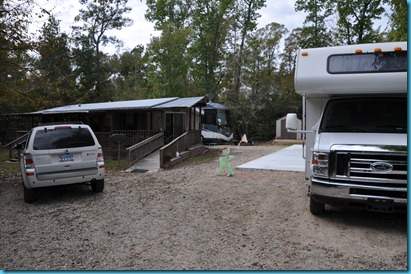 Ed & Sandy were very supported and helped Carol get around since she couldn’t drive at all.  Thanks guys!

I was discharged on “Friday the 13th.”  I was back in the ER about 3 hours later due to severe pain.  A couple of hours later I was out with a prescription an a “shot” that will hold me over.   All’s well.

No need for the continued details mainly because everything was a blur for the next two weeks. 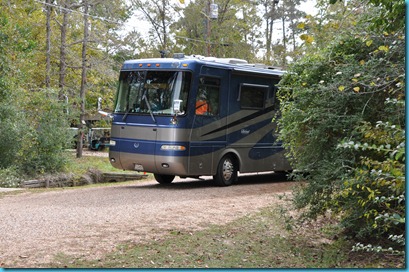 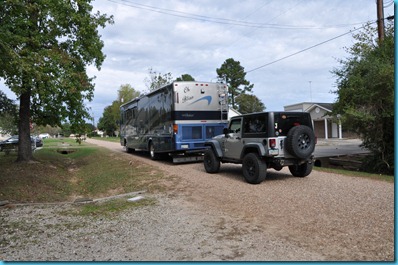 Did a little help for the two Boot Camp’s that were held by the Escapees.  Very little help the first one which was the day after getting out of the hospital.

I’ve seen two more doctors the last being a gastrogist (sp?).  I lost 26 lbs in two weeks and am now holding at that with no gain or loss for the past week.

Now I got an upper Endoscopic Ultrasound scheduled for 4 Dec.  This will tell the doctor what’s going on in my gut/chest.  The doc told me he will find out if I need anything like meds temporary, permanent or an operation.  Don’t like two out of those.  I got more blood tests tomorrow (Monday 30th).  Mark has volunteered to drive me, Carol too, to the hospital, 50 miles away, on the 4 Dec.  Carol can’t drive because of her sprang right foot.

Carol has fallen twice trying to do more than she should.  Her foot hurt for awhile but is back to normal pain when used.  She’s on the walker in the rig and crutches outside.  She will be laid up for another 2-3 weeks.  No daily line dancing is killing her.

We went and got my Mother and brought her back to the mobile for Thanksgiving Dinner.  Carol and I did manage to make dinner.  Me weak and her kneeling on a chair.  It was funny but we did it.  Mom enjoyed it.

Now I got Carol’s old new computer with Windows 10 and Office 2016. Carol got another new computer and is having some troubles with that. It can’t be the operator! On mine it won’t let me download Microsoft Live Writer all the way ERROR. So no blog. I go to my old computer and use it for this.  If anyone knows a secret to get Live Writer downloaded let me know.

So not much is happening in December except maybe a short trip in the Class C next week.  Maybe one more after that.  If we go out I will do a blog even with pictures.  No go out, no blog until after Christmas when we leave (27th) if everything goes as planned.

2 RVs, one mobile, a two story garage, terrestrial rains and one didn’t make it dry all the way.

Changing from Windows 7 to Windows 10 plus Office 2016 is more than a learning curve for a non computer person – me and Carol.  It ain’t all working.