Move it Move it!

We' moved to Va from Baltimore via route 301 south.  It’s the back way so we wouldn’t have to use Interstate 95 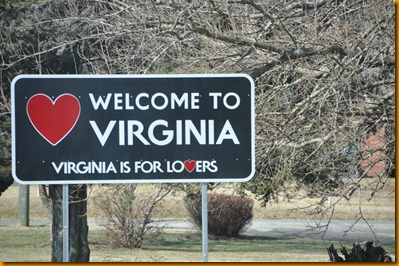 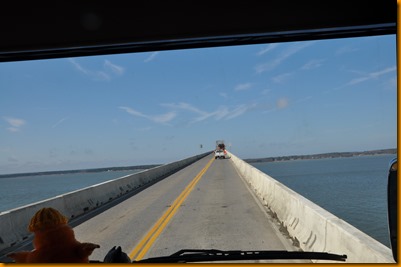 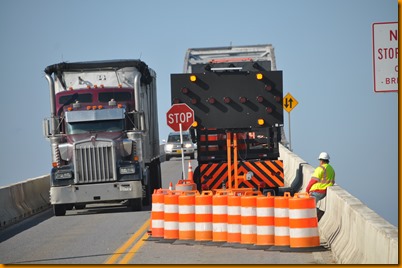 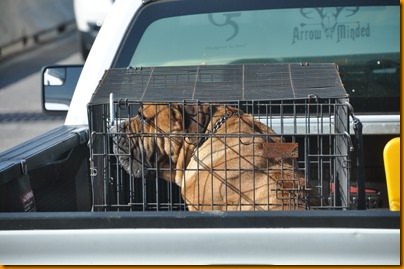 Hunted for a site in this sloppy hook up at this military campground at AP Hill and managed to find this one.  We don’t care about the night light pole.  It ended up being a FHU with 50 amp.  Not too shabby…. 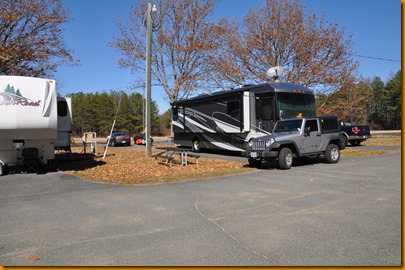 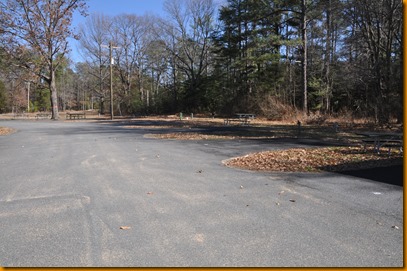 Need I add to this picture below…. The top numbers are outside sensors under the rig.  The bottom number is for inside.  Yes, we actually ran the ACs.  These are the same sensors that were reading in the 20s last week in Baltimore. We are about 45 miles away from Kraig’s hospital.  Kraig is still in the Richmond hospital and is doing better than he was.  He has a very long road ahead of him and we will support him 100 per cent of course.

Retirement is helping those in need.

See you when we see ya…… 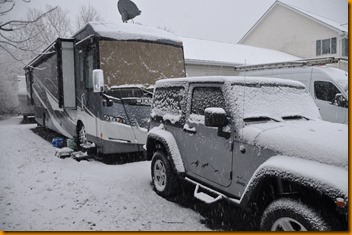 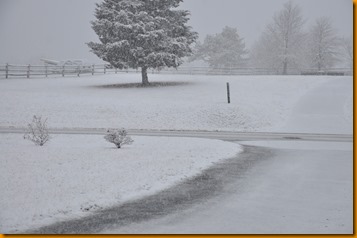 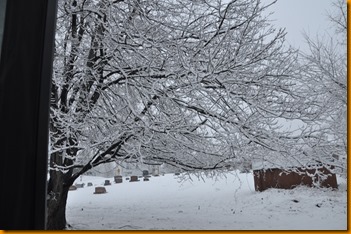 Retirement is enjoying the weather.

See ya when we see ya

Hurry Up and Wait

Kraig was readmitted to the hospital today for his heart condition.

He was released on 1 Feb with a 30 day supply of meds.  We were trying to get him in the Moss Clinic in Fredericksburg, VA.  That appears to be about 4-6 weeks from start to his follow up/care with a doctor.  Tooooooo long.  He had a previous scheduled follow up in Richmond with a doctor if he couldn’t get into Moss.  Well, he had a friend take him to Richmond for his follow up with a heart doctor which was two weeks after his initial release.  Kraig appears to be OK but he really isn't.  The doctor readmitted Kraig to the hospital because he wasn’t doing as well as expected.   We spoke in length to his care taker while in the hospital.  The hospital is going to run more tests tonight and again tomorrow.  Plus, they are going to schedule a social worker to see him for applying for disability. Hmmmm.

We are ready to go back to Richmond in a moments notice.  We’re following the hospital’s recommendation for us while in Baltimore and will go to Richmond when they say, maybe sooner.  We are in constant contact with Kraig (his cell) and the hospital.  Right now, everything is up in the air.

It’s suppose to snow 2 inches Saturday here in Baltimore/Richmond.  That will be interesting.  We can and will drive in anything if need to be.  When – that’s the hard question.

Retirement can be in difficult.

We’re still  near Baltimore at Carol’s brother place next to the garage in the RV.  We’ve been running the roof heat pumps when the nights have been above 30" degrees or so.  Not a whole bunch.  Tonight it’s suppose to get below 30 degrees so I will do a change over to electric heaters in the middle of the night probably.

Seems like nothing has changed a whole bunch up here  at Carol’s brother’s place.  It’s just cold and raining a lot.

Kraig has an appointment this Wednesday.  It’s results will give us an idea when we will be heading out of here and down to Fredericksburg, Va.  We will probably go down near Fort A. P. Hill.  They have a campground that will do for us for awhile.

Since not a whole bunch is happening here I don’t do a blog everyday but I will tell you that it’s been raining a lot and cold.  Also, we’ve been eating but no pictures and very little details.  We had Texas smoked pulled pork and it was damn good.

We had some friends that are flying up to Fairbanks, Alaska to see the Blue Lights in the sky early this week.  We were invited months ago but no thanks.  We just have too much going on and don’t need that expense for sure.  Maybe they will send me some pictures I can use.

Retirement is happening one way or another.

Now Up Near Baltimore

We left Fredericksburg, VA and went up to see Carol’s brothers, David & Steven.  She might even see her third brother Eric.

Kraig is doing OK.  Now if we can get him to answer his phone a little bit better.  He has his interview next week again with the free clinic interviewer.  He got the needed two documents within an hour but they won’t see him for another week.  BUT they take walk ins! They really have piss poor coordination between themselves (offices).  Yes, I’m an expert and can fix their problems if in charge.  In the past, I have been sought out to do certain organizing by people in the know.  I sound like Trump don’t I?  Oh well……..

We left our American Geese and headed for Baltimore.  When the geese left the area they left poo all over the place.  It looks like it was invaded by a bunch of careless dog owners, poo everywhere. 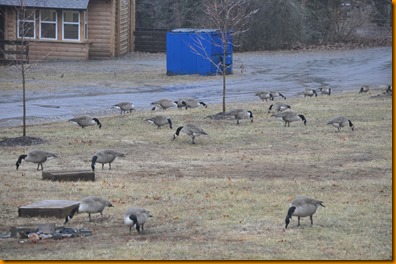 Before we left we had ICE on our slide out tops.  A little work and everything was fine.

At Carol’s brother’s place, (Steven), we took our usual place… Later David came over and we already had Steven so we cooked dinner for all.  Nothing like Alaskan halibut and rice.  We just so happened to still have some halibut from Alaska.  It was good. 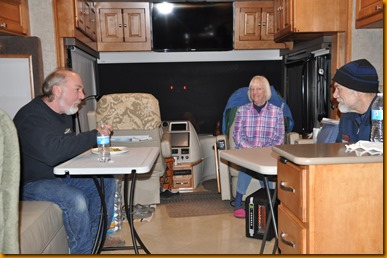 We talked a lot about “stuff.”

Retirement means not having to go out into the cold early to go to work.

Carol and I ended up driving down south 25 miles to Fort AP Hill’s military campground.  Opps no pictures.  We’re gonna go up to Md Thursday and plan to come right back down here.  We want to make sure Kraig is in his routine again.

AP Hill isn’t too  bad.  Old paved sites are a nice start.  They have about 20 sites or so.  Most are 30 amp hookups a site or two way.  They’re water is the same way.  Dumps are somewhere around some of the sights.  No splitters allowed.   Must have seen me coming.  They have a laundry house too.  The cost is $13 which makes everything else kinda OK.  The place looks OK for our return trip maybe later next week.

Retirement at times is awful busy for not working.

I watched the game.  Then “This Is Us” and of course Jimmy Fallon afterwards.

My opinion… two good offense teams with neither one having a defense to match.  Look at the score and that will tell you that.

I think our outside temp gauge froze.  It hasn’t moved off 31 degrees and it’s under the rig.  I guess I will use the old gauge – me.  Yep, it’s damn cold outside and rained all day.  That’s your weather.

Of course mention food.  What’s a blog without food.  With that in mind, I will say we ate food.

Just kinda waiting for the eye exam Tues and the clinic the same day that are all for Kraig.

We might know how we can help Kraig come Tuesday.

It was 16 degrees this morning at 8 AM.  RV pipes are frozen.  Two plug in type heaters running full blast, RV front furnace running full blast and we are dressed for warmth.  Hey, we’re not shaking.  The high for the day is under freezing temperatures.

Kraig wanted to go to his place.  No problem.  He seemed himself so we did.  He’s still on his night work schedule at McDonalds and sleeps off and on during the day.  15 years at the same McDonalds, 35-40 hrs a weeks, $11 bucks an hour, no paid vacation and no medical benefits what so ever.  Yes, that’s sad.

Retirement can be difficult.

At 8 AM we were eating breakfast at Denny’s at Carol’s request.  We called Moos Clinic and got a recording.  They’re only open on Mon thru Thursdays and this Monday will be closed.  It’s a free clinic.  More paperwork….

Then we went to Walmart.  We got Kraig about $100 in clothes.  They’re Eye Exams are on Tues and Thursdays and cost $69.  We made an appointment for next Tuesday.  America’s Best Eyeglasses has no opening until March as we found out.  Oh yea.  One of the hospitals lost Kraig’s eyeglasses and some other things.  Of course they wont pay immediately and he needs stuff now….  The clinic is for follow up on his heart and hopefully pay for his meds.

It’s noon and our temp gauges in the sun read 33 degrees and the wind is howling.

We stayed in and did laundry that’s located within sight of the RV site.

Retirement is not good for sun chasers in real cold weather.

See ya when we see ya…

I’m writing this about Thursday.  The hospital released Kraig about 2 PM with 5 med bottles and a whole bunch of paperwork.  We left Richmond about 3 PM and was headed for Fredericksburg, VA up the road about 60 miles.

We got to a Coast to Coast (C2C), Presidential, that we have stayed at before.  They knew of our situation and got us into a spot without having to deal with C2C headquarters. 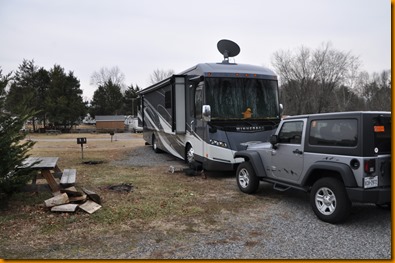 We got a 30 AMP site period.  I had a 50 amp splitter and it worked.  We have two 30 amp plugs to work with.  Thank goodness due to the  cold weather. 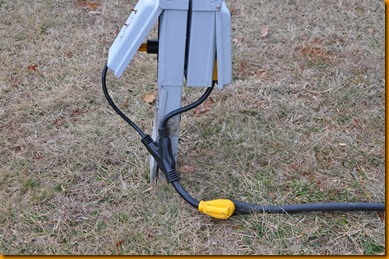 The park itself is dead….. 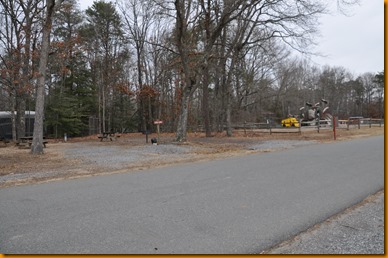 We decided to stay in for the night.  Kraig fit on our couch and the temps only got into 30’s.  Tomorrow we are talking about in the teens at night and staying below freezing in the day.  COLD!

Retirement is doing things then not remembering for sure.