Went to bed at 7:30 PM and then woke up at 10:30 wide awake.  Then went to bed again at 3:30 AM and slept until 6:30 AM.  Took a shower, made coffee, took a bunch of back pain pills, did the blog and decided to go for the RV park’s breakfast that started at 8:30 AM.  I walked up and much to my disappointment nobody was there at 8:30.  Wow, popped my bubble.  Then I remembered I was in California and not Arizona.  I looked at my phone. Yes, I was an hour early.  RVers run into this a lot.  I just chuckled and thought Time Was On My Side today.

I like this scene so I took a picture. 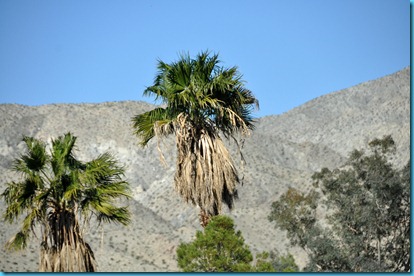 I dusted the Dutch Star off real good.  At least the lower and part of the upper as far as I could reach.  Tomorrow I will try and clean the front windshield real good and finish the dust off.  It’s nice not having humidy and condensation in the morning.  RVs don’t get that sticky dirt on them – just dust. You know our last rig I named it the Farton.  I need a name for this one.  How about -  Oh Yea! Any ideas?

The TV King Dome couldn’t find the sat yesterday.  We’ve had a few problems with it.  It was at the point when we heard the signal noise start up on the TV we would shut off the King Dome and everything would be fine.  Well, now I can’t even do that.  Maybe it’s the wind too. I even read their instructions. Then I called them.  A tech walked me thru everything that I had already done – no bigee.  Then he wanted me to get on the roof and run a new cable from the King Dome thru the window and into the TV receiver.  I said no – too windy.  He said if it’s the same same then it’s a bad circuit board in the King Dome.  Sound familiar that a circuit board could be bad. Boy – low voltage was a killer in this coach. I will give it another shot tomorrow or so.  Maybe get up on the roof and run a cable. No hurry. It might be a good time to polish those wheels.  I can’t use the good “stuff” on them because they have that Accushield on them – no abrasives, just wax, polish & detail stuff on them.

I ordered another grill. It’s a three burner Camp Chef.  I saw Bob & Molly’s back at Betty’s and then again in Quartzsite.  It’s not the type to break out cook a hamburger and then put it away.  It’s for cooking.  I got a couple of do dads for it too. I think I might have to carry a fork lift to move it.  It’s already arrived over at the TTN Wilderness near Hemet.   I go there Friday for two weeks.

The wind has let up a little from when I arrive and should just about be gone by the time I move out Friday – good.