Oh, I forgot to mention about the frig stop working the other day while I was dying from the Qsite crude.  It just stopped completely – nothing.  I checked the 12 volt fuse box, the circuit breakers.  I had juice going to the back of the frig but not going into it.  I panicked because I had a freezer full of smoked pulled pork.  Since I had the freezer down below it was just a matter of moving it down and turning it on which went fine.  I called Newmar and got a tech who walked me thru the things that I had already done.  He said it was after hours and that he would get Norcold on the line the first thing in the morning and we would do a conference call and try to get it repaired or find out what was needed.  I called several repair shops that resulted in having to wait 3-5 days.  Yea, right.  I guess they don’t understand what a full timer is and having no frig.  Anyhow, I had a bright idea.  Have Mark, the Escapees Tech Advisor, who is here with the Boot Camp Program take a look.  He arrived and fifteen minutes later it was working.  There was a hidden 5 AMP fuse in the rear of the frig in a circuit board box out of sight.  Done deal.  Thanks a lot Mark you saved me a big friggin head ache on top of having the Qsite crude at the time.  The smoked pulled pork will stay below in the freezer for awhile.

After I weighed the RV the other day and as I was returning to our site I realized I have never backed up this 43’ or any for that matter.  Well, practice what you preach I thought. So I pulled up and angled it as much as I could.  Put in reverse and backed it up VERY SLOWLY.  Backing slowly gave me the time to look in all my mirrors. I stopped and adjusted the big ones so I could see better. Then continued backing very SLOWLY. The slower you back up the more control you have.  I backed up into the sight with no problem because I backed up SLOWLY.  Did I mention S L O W L Y?

Today I installed the Silverleaf and got it running. Then I put the GPS where I wanted & will see how it goes.  Then I hooked the remote monitoring device for the EMS system that was reinstalled by Daryl Lawrence while out in the desert. The brown table that the Acer computer is setting on swivels in what ever direction I need it to go. Plus it’s free standing.  I got it in Goshen just for this reason to hold “stuff”. 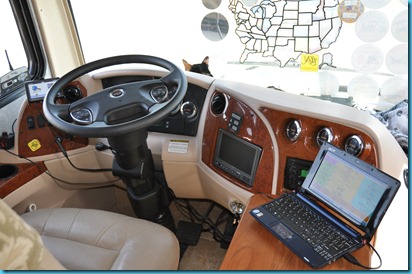 Then I went for broke and worked on adjusting the windshield wipers.  The drive wiper would go to far to the side and get stuck.  I adjusted it and it works fine so far.  I got to get my CB installed but not sure if I going to do it or let a pro do it.  The RV is not prewired nor has an antennae. I can always wire to one of the 12V plugs.  The antennae I just get on the roof and drill – right?

Wow, OK I finally got some things on my list off of it.  Tomorrow is Superbowl Day.  We all got some neat plans.