This morning I was up at 2:30 AM getting this blog updated and reading others.  It’s now 4:30 AM and I’m almost finished.   I hooked up our LP heater when I got up.  We only run it when we are awake.  Ed Kruty helped me ( I helped him) install it last year.  It’s great because it’s quiet and cheap and no use of electricity.  That’s a bigee when boone docking of course.  We’ve been running the 8K generator a lot.  One because it’s been a little over cast and two because we love using everything like we are hooked up to a 50 AMP site.  .

Mark and I are going for a little jaunt on the bikes this morning so I went back to bed about 5 AM. blah, blah…

At 9:30 AM I met Mark on route 95 & Plomosa Road and were off.  Our first unplanned stop was Parker Dam. 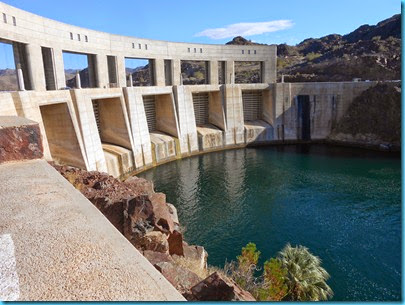 Then I did it…..my first selfie…so no complaints.  The camera is not the selfie type camera, no screen to see what your shooting….. 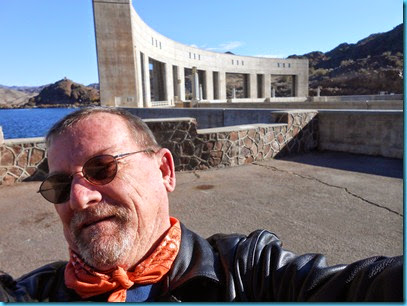 Our next stop was the London Bridge in Lake Havasu. 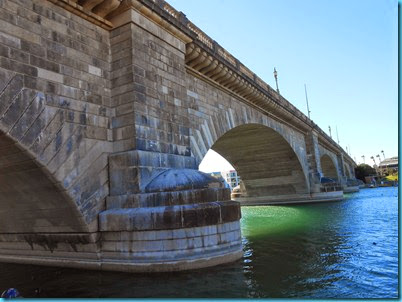 I was more interested in the ducks.  They were  more entertaining. 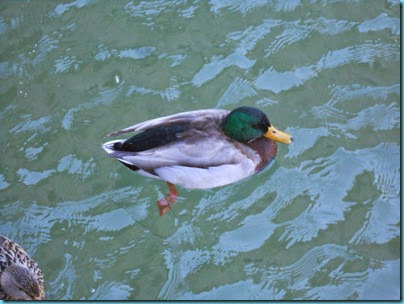 We got fuel at route 95 and Interstate 40.  We wanted to get fuel there because it was AZ prices vice CA prices.  Also we could make it back to Quartzsite without filling up again.

We then crossed over into California via Interstate 40.  We got off at Needles and drove thru Needles on the old original Route 66.  We were really surprised that Needles looked like a dead old town.  There was no places to eat.  Really! We were looking for the small type restaurants on the main street (route 66).  Stores were boarded up, dumped, falling down, almost a ghost town.  Back near the interstate there was a Denny’s and a Jack In the Box.   We went for the Denny’s.  The waitress said, “Yep, we are the Ma Pa Restaurant here in Needles now.”  She said the town just faded away.  It was lunch time and it was us and a lady in there at lunch time.

After lunch we headed south on route 95 on the California side.  It was nice roads all the way south.  There were some sightings that looked like the rocks near Sedona, AZ.  Plus some mountains that reminded me of the rocks near Moab, Utah.  It was pretty unique with some long straight roads.  Very little traffic.

We got down to Blythe and stopped at a gas station just to get our bearings and make plans for our departure once we get into Quartzsite.  Mark is staying at the SKP social area and we are up on Plomosa road.  We figured I would get off the 1st exit and Mark would get off the 2nd exit and go our separate ways.  The price of gas was a dollar higher a gallon here in Blythe than in AZ.  No we didn’t get fuel.

OK, it’s karaoke time at Silly’s Al.  A bunch of us decided to go.  Mark usually sings and the “girls” back him up.  It’s hilarious.  We couldn’t get a table in the front and got stuck all the way in the back to one side.  We couldn’t even really hear the singers much less see them.  So we did our own thing..drank beer and ate pizza.  Let’s see who was at the gathering…Ed/Sandy, Denny/Susie, Walt/Kellie, Carol & I, Mark N, & Bob/Pat.  We were back at the rig by 8 PM.  Real party people aren’t we?

We had to run the generator for 2 hours to bring the batteries up to 12.7.  This morning at 7 AM they were at 12.0.  Something isn’t right.  I know we got the residential frig and the freezer underneath.  I just don’t think they should be drawing that much current from 8 AGM batteries.  I think I will  look into it more later today probably.