THIS IS FOR SATURDAY & SUNDAY

Sunday we drove  425 miles.  We have been smelling the roses up here in Alaska and are ready for some lower 48 states roses.  We chased a big rain cloud but couldn’t catch it.  The rig and car need a wash even if it’s rain to get the underneath and top halfway clean.  We ended up in the Bow Valley Provincial Park just west of Calgary, Alberta by about 50 miles.

SATURDAY…We left Hyder in a light rain.  We got out of Dodge just in time, we think.  It drizzled hard Friday night.  If it would have rained hard it would have woke us up but it didn’t.  So it drizzled hard because it was very wet.  Once we got away from Stewart/Hyder and to the Yellowhead Hwy (40 mi) it stopped the hard drizzle and the sun came out.  We went about 450 miles Saturday.  I have a question since we have been away in the wilderness a little bit.  What is it called when there are  stripes on highways, smooth roads with shoulders, a lot of traffic, speed limits above 55mph, ignorant drivers, cities with red lights, clean vehicles, tall buildings, no ma pa type stores, fast foods, gas stations everywhere, etc. ?  What do you call that?  We think it’s called civilization.  Wow, it was nice without all that crap.  We both prefer the wilderness type setting.  Carol says as long as there is a  Wal-Mart with a few hundred miles also.

Sometimes the bridges are a little narrow.  You figure it out who goes first. 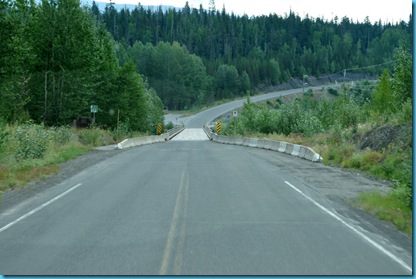 We consider this  an outstanding road up north. 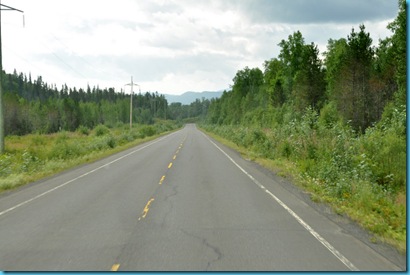 Typical gas station but they call them Gas Bars in British Columbia in some places.  When you think about it it makes sense. 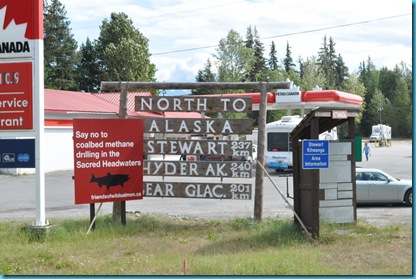 This was a big city for us. A double laner each way even.  They also had an overhead sign that showed us what pedestrians looked like in case we forgot.. 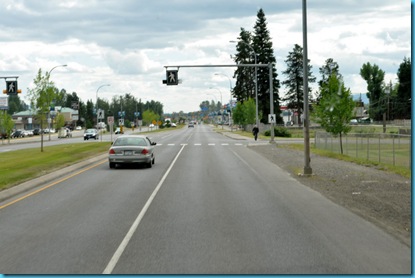 I wonder how I get lost sometimes – everybody is asleep.  But she does have that Milepost handy in case of an emergency. 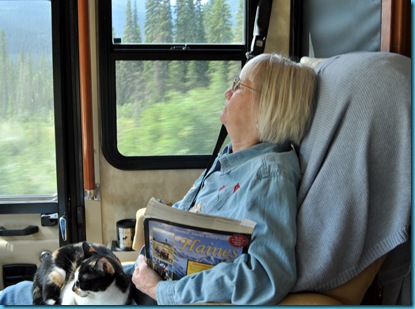 One more night (Monday) in Canada.  No more funny money nor liters – YEA………..