Wow, when that AC came on at 7 AM I thought I must have set the thermostat way down low. I went and looked at it and it was set on 75 degrees.  I left them all on 75 degrees for the animals…best reason I can come up with.

Part of full timing is rearranging.  You have major rearranging and minor.  Seems like every time we go grocery shopping we have to rearrange  “stuff”.  That’s minor.  Buying a RV means major major rearranging several times for months.  When we get back to our lot in Livingston I will do some major rearranging underneath. It just isn’t the way I like it.  It’s just workable now but not likeable and there is a difference.

When we started full timing in June 2000 in our 34’ 5th wheel we were a little on the heavy side (carrying). We went through several phases over the years as most full timers do.  Eleven years later we almost know what we need or desire to carry.  It still changes more than I can admit.  That’s what’s nice about having a storage shed somewhere. You can drop off and pick up from it.  It seems like it’s more dropping off lately.

Cars & pick ups.  I use to see people loading their cars up and just said to myself that I would never do that.  I have learned to say never.  Our car is loaded in the rear and sometimes I even have to put down the rear seats to carry more.  When we had a pick up and 5th wheel I tried keeping the rear of the pick up bed pretty empty.  Lost that war pretty quick especially on rainy days.

Here’s looking out the backside of our campground. 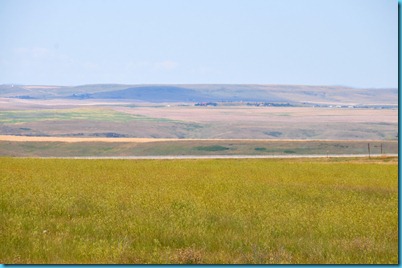 Got the kayaks off the car finally.  Now I can clean the top of the car better. 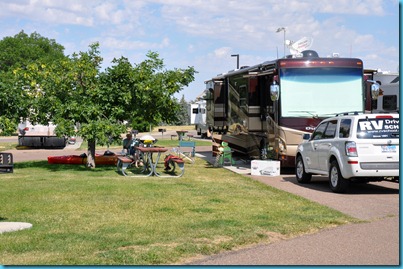 As a joke we put a ribbon on Brandi and gave her to Marilyn for her birthday. 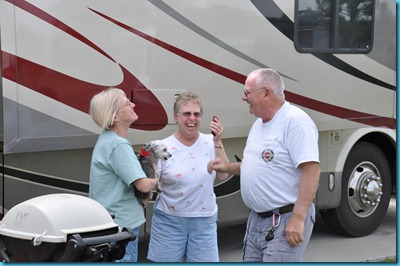 We went to this restaurant later for dinner.  The food was really great for quantity and quality.  It was Marilyn’s birthday and Gloria & Franks’ 51st anniversary. 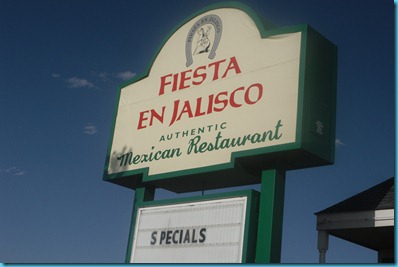 Here’s the best of the 4 couples.  All the guys must have been chasing the pretty waitresses. 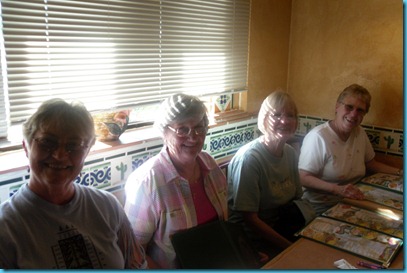