Alaska adventure fuel prices… In Alberta fuel ran between $4.56-$4.90 (converted).  We didn’t get any fuel in BC.  In Yukon we paid $5.45.  In Alaska we paid $3.98 to $4.32.  Total mileage was 7,640 and total diesel cost was $3,110.  Grocery stores were about 25-30% higher and eating out was about 30-35% higher depending on where of course.  Campgrounds ran about $30-$40 with hook ups.  Campgrounds without hook ups ran about $15-$20.  Some were lower and some where higher of course.  The toursaver.com coupon discount book was well worth it.  The Milepost book was a necessity.  Mike & Terri Church’s book Camping Alaska really came in handy.  Next time we would skip Fairbanks since we’ve seen it so many times.  We would focus down south.  We would go up the Cassier Hwy and skip Dawson Creek.

I’m still having trouble cleaning the Baby’s wheels. The stuff that Canada puts on their new roads is terrible. It feels and looks like tar. I’ve even used lighter fluid and WD-40 and doesn’t really budge. I’ve used on the normal products first that didn’t do anything. I will figure it out….

Readers have asked how I damaged the front end of the “Baby.”  We were going threw Jasper Nat Pk during May en route to Alaska when it happened.  I turned into a parking area that was identified for large vehicles….wrong.  It was snowed in pretty good.  I was turning in a car lot that was also snow bound.  I was getting close to a snow bank.  I had two people watching out.  The right front end went over a snow bank that turned out to be a ice bank.  The right front lower portion caved in and broke.  My fault.  The driver is always responsible for the safe operation of their vehicle.  The duct tape left marks. 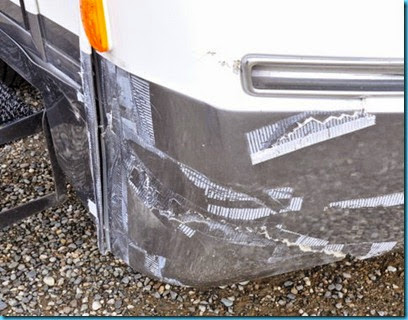 Winnebago said that the entire front end (lower) needs to be replaced.  Winnebago now makes their front ends in two pieces – lower and upper.  So that’s good.  Still $8,500 then our $1,000 deducible from that.

Oh yea, I’ve lost 10 lbs plus in the past week or so. Mostly the gut. Carol says she too has lost a few pounds too!  I plan and will lose more.

Does anyone have an old motorcycle in the 650-1200cc for sale?  I say old because I don’t want to invest much.   I may not be able to ride for long if at all.